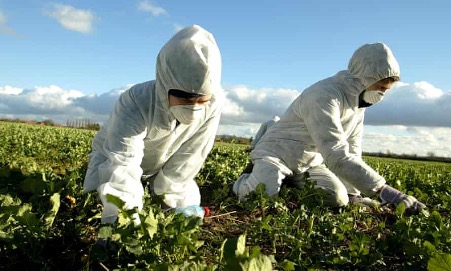 Reports reveal that Africa is going to become a dumping ground for the already struggling genetically modified (GM) industry. At the same time, it has been a favorite destination for the frustrated scientists who want to work for extended hours in the laboratories.

The experts in the field of GM technology reveal that GM crops are an integral part of the second green revolution and it can provide a reliable answer to African hunger. But if we pay close attention to the concept of GM crops, it doesn’t fit in African agriculture.

It is observed that the extended push to adopt GM crops in African agriculture is not working so well and it is mainly because of the lost strength of this industry in other parts of the world.

A large number of networks, organizations, and lobby groups that have a close connection in the GM industry are working hard for the promotion of GM agriculture in the entire continent.

GM Crops are currently available in the Southern part of Africa; however, there are many other parts such as Burkina Faso, Egypt, Zimbabwe, Senegal, and Kenya where people have the least knowledge and expertise about GM crops.

There are several potential reasons to reject the adoption of GM crop trade in Africa; a few of them are listed below:

GM crops are some uncontrollable plants as their pollens can travel up to longer distances via insects and winds.

The seeds can also spread due to human error or traditional farming practices. GP crops can also contaminate non-GM crops; therefore, they cannot coexist in the fields. Moreover, farmers that have contaminated fields due to the growth of GM crops may be later forced to pay royalties to the companies that have filed patents for the GM crops.

These issues can leave serious troubles for the small-scale farmers, especially in the areas where the government has tight and unrealistic controls over farming and seeds.

GM seed manufacturing companies do not allow farmers to save their self-produced seeds for the new season; moreover, they cannot share them with friends, relatives, or neighbors.

These terms are applied through agreements, contracts, and conditions that are imposed by reputed multinational GM seed companies. But if we talk about the African culture, small-scale farmers here prefer to save their farm produce for the next seasons.

Therefore, the introduction of GM seeds will affect the vital and traditional practices in the area. Farmers sometimes do not have enough money to a whole new lot of seeds and they are more dependent on seeds shared by friends and neighbors.

But the trend of GM crops will diminish the opportunity in the African communities. It will post considerable harm to the vital and traditional agricultural practices.

GM crops will promote the use of harsh chemicals

Almost 70% of the GM crops in the entire world are modified to show resistance against some types of herbicides. In most cases, the farmers are required to use herbicides sold by GM seeds manufacturing companies to grow GM crops in their fields.

Although these crops can generate huge amounts of profits for multinational organizations, it is still important to consider the impact of harsh chemicals on produce and the overall health of the end consumers.

The Â‘Traitor’ and Â‘Terminator’ technologies are some of the best examples of the widely famous Genetic Use Restriction Technologies. Note that the seeds of Â‘Terminator’ are modified by following genetic procedures so that the plants at the next stage can also p[roduce sterile seeds. These new seeds are infertile in nature and cannot germinate in the next season.

On the other side, Â‘Traitor’ technology requires farmers to spray their GM crops with specific types of chemicals to ensure proper growth. Although these technologies are mainly implemented in the developed countries, they do not offer any long term or positive benefit to the farmers.

The GURT technologies need African farmers to become highly dependent on companies for both seed supply and relevant chemicals without which, crop growth in the fields is not possible.

These new-age technologies ensure incredible benefits and high-end profits to the concerned multinational companies, but they can spoil the fields and agricultural customs in Africa.

The translational corporations in Africa own almost 100% of the patents from the agricultural biotechnology field. Most of these patents are from plenty of pesticide corporations out there.

The big GM corporations with patents can block any research going on against their interests so that farmers can keep on paying heavy royalties every year.  Furthermore, it will lead to a never-ending dependence on these reputed companies to receive specific types of fertilizers. This is another important reason why GM crops are not a part of the agricultural practices in Africa.

Large farms: If we look at the stats, almost 80% of the population in Africa include small scale farmers that have almost 0.5 to 3 acres of land. It is important to ensure that modern agricultural technologies help small scale farmers in intensifying and diversifying their profits from farmlands.

Monocropping: Africa is known for the challenging environmental conditions along with the small size of the farms. Therefore, monocropping is not a favorable solution for the African agricultural system.

Subsidies: It is observed that farmers in the west are subsidized but African farmers do not receive any subsidies. Therefore, it is difficult for them to manage the cost of crop production.

Mechanization: The farmers in the developed countries are highly mechanized but in the African areas, farmers are more dependent on animal power and human efforts.

Impact of external inputs: The farmers in Africa cannot afford the extensive cost of inputs required for the growth of transgenic crops. This is the main reason behind the lack of adaption of the green revolution in African regions.

The threat to sustainable and organic farming

A wide range of farmers in Africa prefers following organic agricultural practices; either by choice or by default. Genetic modification of crops is a big threat to the farmers in such areas; here we have listed few reasons:

African nations face a scarcity of modern equipment, legislation, expertise, regulatory systems, and infrastructure to implement advanced biosafety measures that are a must for GM crops. At the same time, the farmers here do not have enough funds to adopt this new version of agricultural practices.

They are highly dependent on external funding for such needs and it can increase their existing foreign debts by a considerable level. Therefore, it is difficult to decide if GM crops and these modern agricultural practices are actually a necessity for the African government at this stage or not.

Most of the population in Africa is suffering from hunger but it is actually not because of the lack of food, instead due to lack of buying capacity. Poverty is greatly affected by trade liberalization in terms of deep global inequality.

In these conditions, African farmers need to compete with the widely popular and subsidies products coming from the West. Other than this, GM crops are likely to create ecological imbalance by destroying biodiversity. These factors don’t support GM crop’s use and Trade in Afrika.

Moreover, these crops are not safe for environmental health and human health as well. Therefore, the African government and local small-scale farmers may make informed decisions regarding the adoption of this technology for their farmlands.

How to Create Your Own Food Forest

@2022 - All Rights Reserved. Designed and Developed by tradeinafrika